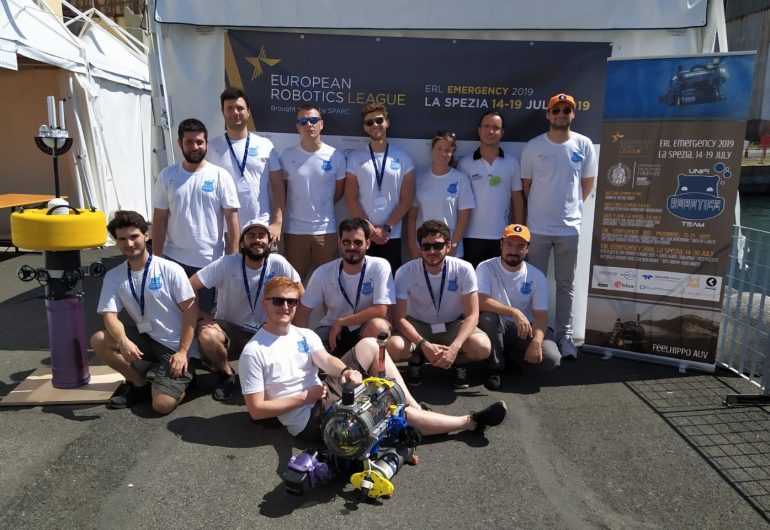 The competition was held from July 14 to 19 at the NATO Maritime Research Center in La Spezia.

The UNIFI Robotics Team , a group of students and researchers from the School of Engineering in Florence, and one of the members of ISME, has been improving FeelHippo, an autonomous underwater robot, not wire-guided, since when it was developed in 2013.

In the same year, at the debut in the European competition, the robot got the third place, confirmed then in 2016. The team from Florence then won the highest step on the podium in 2018.

From the passage between two buoys underwater to the recognition of some numerical and colored targets up to the signaling via modem of the position of three-dimensional objects, the underwater robots competed in various tests of ability. Eventually the autonomous Florentine drone scored the best score in the water.

"The challenge this year - Say Benedetto Allotta, Head of the Department of Industrial Engineering (DIEF), and Alessandro Ridolfi, researcher at the Applied Mechanics section of the same department, both supervisors of the 2019 team - was the autonomy of the vehicles and on-board intelligence, that is the vehicle's ability to be able to reprogram actions during navigation, once they have acquired some information such as the automatic identification of an object ".

FeelHippo is a modular vehicle based on an aluminum bearing structure covered from a transparent plexiglass surface. It is equipped with cameras capable of automatically recognizing objects using algorithms based on neural networks, underwater sonar to reconstruct the map of the seabed and an acoustic modem that can be used for communication in underwater navigation.

"We are very happy with this new victory, that rewards the work of our young students and is a source of satisfaction for the whole Engineering School of the University of Florence - explains Benedetto Allotta, Head of DIEF - the competition is an excellent opportunity for students and researchers who can further enrich their training and meet colleagues from other universities, research centers and companies".

European Robotics League (ERL) Emergency 2019 aimed to promote innovation and technology to encourage the interest of young engineers and scholars towards underwater technologies. On the occasion of the event the students, supported by NATO experts, were able to compete with advanced underwater technologies and with cutting-edge tools.